“I found the Institute thoughtfully planned and executed. The transcendental movement was, in its time, and continues to be understood as multi-faceted in scope and aims, and the visiting faculty's presentations successfully explored the movement in all its breadth and depth.”

“I am confident that this institute will have lasting effects on my career. Studying the Transcendentalists in their hometown of Concord among a group of scholars and educators was an experience that I will never forget. Thank you.”

“I am very grateful for this NEH program. The institute exceeded my hopes and expectations. I feel it is a model for how to regenerate scholars at mid-career. We participants will carry with us a new sense of purpose. Many of us felt that we had rarely, if ever, been in the company of so many bright minds and sensitive hearts.”

“The program was excellent, providing me a chance to meet fellow teachers/scholars with an interest in the Transcendentalists, explore the historical contexts of Transcendentalism, and research materials of particular importance to me. I've already revised my American Literature survey syllabus in light of what I learned.”

“This experience deepened my understanding of the Transcendentalists in context with their place and also my historical understanding of Abolition and the important role women played in social reform This understanding is invaluable in my research and will make me a much better teacher of these subjects.”

“This seminar vastly increased my knowledge about Transcendentalism and the most significant Transcendentalists. Being in Concord, and specifically at the historic Colonial Inn, gave me an invaluable grounding in that specific place and helped me to understand its importance in and influence on the lives of Louisa May Alcott, Ralph Waldo Emerson, and Henry David Thoreau.” 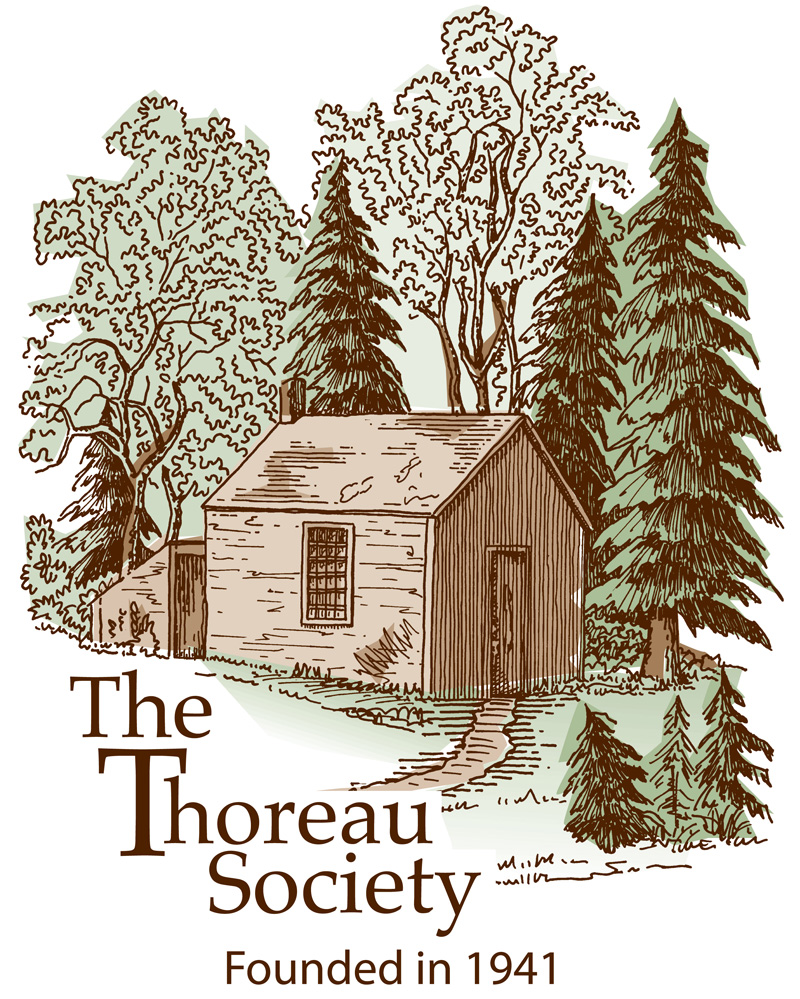 We welcome your application for the two-week Summer Institute on “Transcendentalism and Social Reform: Activism and Community Engagement in the Age of Thoreau,” which will be held in historic Concord, Massachusetts, June 26 through July 9, 2022. Sponsored by The Thoreau Society and funded by the National Endowment for the Humanities (NEH), this program will offer you an unparalleled and immersive opportunity to expand your knowledge on this topic in its geographical and intellectual center of Concord, Massachusetts.

We encourage applicants who are full-time and adjunct faculty as well as advanced graduate students who teach at colleges and universities, including community colleges, in a variety of disciplines. Instructors in American Literature, American History, American Studies, Philosophy, Women’s Studies, Social Sciences, Expository and Creative Writing Programs, Interdisciplinary Humanities, and Environmental Studies will especially find this Institute to be useful.

This Summer Institute is grounded in student-centered pedagogy and engaged scholarship, highlighting the broad scope of the Transcendentalists’ reform activism and, especially, offering concrete ways of making their writings relevant to today’s students without compromising their idealism or complexity.

“Never have the Transcendentalists had so much to say to their descendants,” claim the editors of The Oxford Handbook of Transcendentalism (2010),1 an assertion repeatedly confirmed in the evaluations of participants who attended NEH Summer Institutes in Concord in 2015 and 2017. Indeed, many public-facing writers invoke the Transcendentalists today, given our current preoccupations with social justice, civil disobedience, and intentional isolation. Whether viewed as idealists or radical social crusaders, the Transcendentalists asked enduring questions that still resonate for Americans, most especially for college teachers: “How can an individual live a moral life in a society rife with injustice and cruelty? Is self-cultivation a means to social reform or a distraction from urgent social issues?” How might we bring “a better world into being?”2

The primary goals of our Summer Institute on “Transcendentalism and Social Reform: Activism and Community Engagement in the Age of Thoreau,” are as follows: 1) to deliver a hands-on, place-based grounding in Transcendentalism and its major figures; 2) to provide seminars and round tables by key scholars on the range of the Transcendentalists’ reform concerns and the specific ways in which individuals and groups enacted their objectives; 3) to facilitate participants’ curricular, creative, or research projects through hands-on experience in relevant archives; and 4) to offer multiple forums for pedagogical and research exchange. This Institute offers an unmatched and “intensely generative” opportunity, as one 2017 participant phrased it, to motivate and prepare the teachers of today’s college students.

The antebellum era was one of the most turbulent and frenetic periods that our nation ever witnessed. As historian Jill Lepore characterizes it, “Between 1815 and 1848, the United States chased its Manifest Destiny all the way to the Pacific; battled Mexico; built thousands of miles of canals, railroads, and telegraph lines; embraced universal white-male suffrage and popular democracy; forced Indians from the South and carried slavery to the West; awaited the millennium, reformed its manners, created a middle class, launched women’s rights, and founded its own literature.”3 Amid this restless ferment, the American Transcendentalists pursued reform above all else—reform, initially, of the church and the individual; and, later, of nearly all aspects of their society. By the 1840s, their origin as a small band of like-minded New England idealists who sought to overhaul the Unitarian church had expanded into a movement of men and women who sought to alter the relation of the individual to community, state, and nation and to reshape understandings of what it meant to be rich or poor, educated or ignorant, male or female, religious or spiritual, enslaved or free. They took up the relations between nature and culture, art and science, laborer and indigent, and enfranchisement and dispossession. They experimented with different models of education, engaged in both isolated and communal living, and resisted a government that seemed like a machine and a society that had become increasingly dependent on literal industrial machines. Their concerns sound familiar to us today because they remain germane and pressing.

Despite their common zeal to improve their world, the Transcendentalists were divided on how best to enact their reform agendas. The movement’s central figure, Ralph Waldo Emerson, advocated “self-culture,” by which he meant the steady, ethical refinement of the individual self. Henry David Thoreau, Emerson’s young friend and neighbor, concurred with this approach to improving the self as a means to reforming society as a whole. By the late 1840s, however, both men had become identified with the activism of the radical antislavery cause, a movement they had previously disdained. Other Transcendentalists, including William Henry Channing and Brook Farm co-founder George Ripley, advocated organized social action as an extension of, even an imperative to, individual reform. The best-known female Transcendentalist, Margaret Fuller, occupied a middle ground. Intellectually, she valorized “Woman Thinking” as a complement to Emerson’s “self-reliant” male, yet she also encouraged women to support each other and then turned her reformist eye to institutional concerns, including urban poverty and the horrendous conditions of women’s prisons.

Many Transcendentalists were leaders in the antislavery and woman’s rights movements, but they also had something, albeit more limited, to say about the treatment of Native Americans during the Jacksonian era, and they spearheaded efforts to reform American institutions. In communities like Brook Farm and Fruitlands, they even restructured their own families and societies. After Elizabeth Cady Stanton and Lucretia Mott called woman’s rights sympathizers to attend the Seneca Falls Convention in 1848, community conventions were held throughout the northeast, including one in 1850 in Worcester, Massachusetts that garnered the support of Emerson and his abolitionist neighbor Mary Merrick Brooks. Indeed, Brooks was often the catalyst who insistently pushed Emerson and other Concord townsmen to reform action. From 1847 to 1850, Margaret Fuller reported for the New York Tribune as its first female foreign correspondent on the political revolution taking place in Italy; ultimately, she supported full-scale political revolution there. On these and other issues, the Transcendentalists not only spoke in secular and religious pulpits but also took direct action in their communities: providing aid in their homes to men and women fleeing enslavement, insisting that women be allowed to speak publicly on political topics, andcontributing to petition campaigns protesting the enforced relocation of the Cherokee people.

“Transcendentalism and Social Reform” will closely examine the variety of reform movements with which the Transcendentalists and their era are most identified. While seminars will especially emphasize antislavery reform and woman’s rights, other dimensions will address their affiliation with efforts for labor reform, their concern for—and occasional avoidance of—the catastrophic crises facing native peoples across the U.S., and their ability to merge (especially in the case of Thoreau) a budding environmentalist ethic with a reformist sensibility.

Locating the Institute at the Colonial Inn in the center of town means that participants will be actively engaged with and walking the very streets and, in some cases, the very buildings in which Henry Thoreau’s extended family lived for some years. Participants visit historical landscapes and have opportunities to experience the rivers, mountains, and fields (including, of course, Walden Pond) featured in some of the literature they have read and taught, enhancing their essential sense of this place.

Selected NEH Summer Institute applicants will have a unique opportunity to work closely with many prominent scholars at the forefront of Transcendentalist and antebellum American studies. See the Project Leaders and Faculty link on the website for the impressive lineup of the authorities who will lead seminars and round tables as they share their knowledge of antebellum reform and the Transcendentalists. Participants will also be able to devote extended time to their own research, teaching, and creative projects during sessions at the Special Collections of the Concord Free Public Library and at the Massachusetts Historical Society in Boston, where they will also be able to examine rare manuscripts and other primary documents, such as town and city records, land surveys, broadsides, photographs, correspondence, and journals. We will also visit the Thoreau Institute Library at Walden Woods.

Please refer to the other links on our web site for details on travel, housing, and meals. The Application link contains the application form and instructions; it also provides information about important deadlines concerning the application process.

We look forward to receiving your application materials. If you have any questions not answered by this letter or on our website, please contact Project Director, Dr. Sandy Petrulionis at [email protected], or Assistant Director Diane Whitley-Grote at [email protected]. 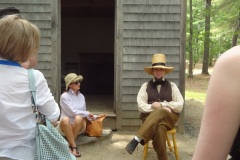 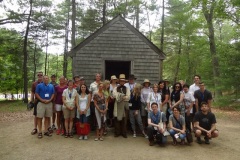 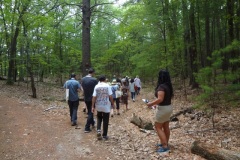 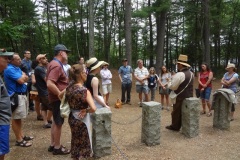 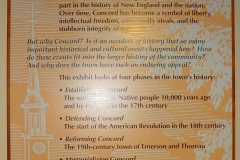 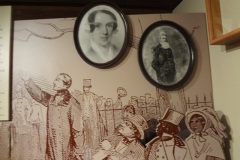 Founded in 1941, The Thoreau Society is the largest and oldest organization dedicated to an American author.